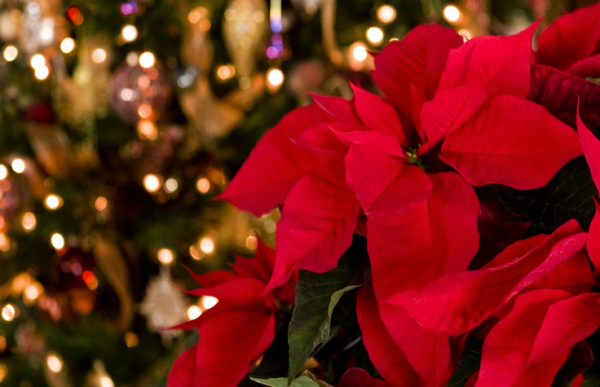 Last winter, my wife shooed the dog and visiting toddlers away from our poinsettia plants, saying "they’re poisonous, you know."

I did not know. But it turns out that the belief that poinsettias are deadly is widespread. The same could be said for mistletoe and holly. But are their reputations for danger well-deserved? Since these plants are especially popular to brighten up homes or give as gifts during the holidays, I decided to look into it.

The risks of poinsettia

Could a plant so common and so well-liked in the winter holidays also be so dangerous? If it is dangerous, what problems does it cause? Must it be eaten to cause problems, or is it harmful to just be nearby? And if it’s not dangerous, why does the myth live on?

The answers to these questions are not easy to find. In fact, the bad reputation may have started in 1919, when an army officer’s child reportedly died after eating part of a poinsettia plant. It is unclear if the plant was responsible, though: many other reports describe mild symptoms, such as nausea or vomiting, but no deaths.

Decades ago, a study in the American Journal of Emergency Medicine analyzed nearly 23,000 cases of people eating poinsettia and found

According to one estimate, a 50-pound child would have to eat more than 500 poinsettia leaves to approach a dose that could cause trouble. Similarly, pets may develop gastrointestinal symptoms after eating poinsettia, but these plants pose no major threat to animals.

The risks of mistletoe

The story is much the same for mistletoe. It’s not particularly dangerous, but may cause an upset stomach if eaten. In fact, mistletoe has been used for centuries as a remedy for arthritis, high blood pressure, infertility, and headache. The evidence isn’t high-quality for any of these uses, though.

Interest also centers on this plant’s potential as an anticancer treatment. Some extracts of mistletoe contain chemicals shown to kill cancer cells in the laboratory and to stimulate human immune cells. For example, a substance called alkaloids has similar properties as certain chemotherapy drugs used in the past to fight leukemia and other forms of cancer. However, a two-part 2019 review found that adding mistletoe extracts to conventional cancer treatments did not improve survival or quality of life.

No one suggests it's a good idea to eat this plant, accidentally or otherwise. But eating one to three berries or one or two leaves is unlikely to cause serious illness, according to the authors of a 1986 review of multiple studies. And no significant symptoms or deaths were described in one report of more than 300 cases of eating mistletoe. However, some sources warn that serious problems or even death may occur if enough is ingested. The specific dose required to cause death is unknown but, fortunately, it appears to be so high that consuming enough to be lethal is extremely rare.

The risks of holly

This plant can be dangerous to people and pets. The berries of holly plants are poisonous. If eaten, they may cause crampy abdominal pain, drowsiness, vomiting, and diarrhea. While no one would recommend eating holly, it is unlikely to cause death. And for at least one type of holly, knowing the Latin name would be enough to discourage ingestion: the yaupon holly is also called Ilex vomitoria.

No one should eat poinsettias, mistletoe, and holly, but if small amounts are consumed, they are unlikely to cause serious illness. It seems to me that the dangers of these plants appear to be vastly overestimated.

Perhaps the most dangerous thing about mistletoe and poinsettias is the choking hazard the berries pose for young kids, although that risk is not unique to plants: any small object poses similar risks. Try to keep holiday plants out of the reach of small children and pets. And keep in mind that berries may fall from these plants and wind up on the floor.

If a child or pet eats leaves or berries from these holiday plants, or any other plants, check in with poison control, your pediatrician, or your veterinarian. But unless a particularly large "dose" is consumed, don’t be surprised if the recommendation is to simply watch and wait.

Still concerned even if you know the risks are low? You can always regift holiday plants you receive to friends with no children or pets, or find other ways to decorate your home for the holidays.

No comments to show.